Family Separation Has Scarred These Kids For Life

End of an era – KuenselOnline

What’s in a name? – KuenselOnline

by South Asians News
in India
0

Bihar is headed towards a bipolar contest in the 2019 Lok Sabha elections. The National Democratic Alliance (NDA) camp comprises the Janata Dal (United) and the Lok Janshakti Party (LJP) under the leadership of the Bharatiya Janata Party (BJP). The seat sharing formula which has been finalised is 17-17-6 for the BJP-JD(U)-LJP.

The Rashtriya Janata Dal (RJD) has formed a grand coalition of all major anti-NDA parties. These include the Congress, two erstwhile NDA constituents – the Rashtriya Lok Samta Party (RLSP) and the Hindustani Awami Morcha (HAM) – the Vikasshil Insan Party (VIP) formed last year, and the Communist Party of India (Marxist Leninist) Liberation. This will likely lead to an unprecedented degree of political polarisation since the division of the state (to carve out Jharkhand) in 2000.

Another interesting statistic which stands out in Bihar is that the vote share of anti-NDA parties has always been close to the two-thirds mark in all elections since the 2004 Lok Sabha polls. This consistency, however, is not to be seen in the seat share of anti-NDA parties, which, in hindsight, seems to be a result of fragmentation in anti-NDA votes. It is a large part of this two-thirds vote share that the RJD-led alliance seems to be eyeing. 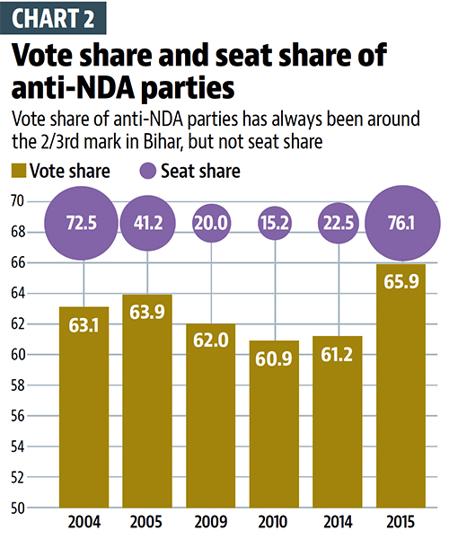 So, can the RJD expect to register a big victory by bringing all major non-NDA parties into an alliance?

The idea of a grand alliance against the BJP in Bihar gained traction after the 2015 assembly election results when a coalition of the RJD, JD (U) and the Congress won three-fourths of the seats in the assembly. In terms of vote share, the grand alliance had an eight percentage point lead over the NDA’s figure of 34%. Had this coalition remained intact, the 2019 outcome in the state would probably have been a forgone conclusion. However, the JD(U) walked out of the alliance to rejoin the NDA in August 2017. Meanwhile, the NDA too has suffered desertions from its 2015 coalition, with the HAM and RLSP walking out.

The 2014 elections were a proper triangular contest in Bihar. The NDA- and RJD-led alliances were the top two both in terms of seat share and vote share, while the JD(U) finished third. However, the JD(U) played spoiler to other parties in 22 seats, where its vote share was greater than the victory margin, and it did not finish first or second. It was the NDA which gained more from this, as the RJD alliance finished second in 17 of the 22 seats where the JD(U) played spoiler. 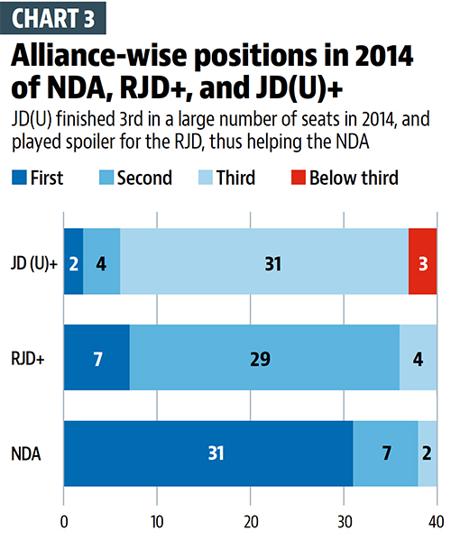 The question which needs to be asked is, what proportion of the JD(U) voters in 2014 were its core supporters and how many were mainly anti-BJP voters who erred in seeing JD(U) as the main challenger to the NDA?

This is important because the JD(U) can hope to retain the former category in 2019 while the latter will probably shift to the new anti-BJP alliance in the state. The NDA lost vote share in 17 Lok Sabha seats in Bihar between the 2009 and 2014 Lok Sabha elections. Part of this can be attributed to the JD (U) walking out of the NDA before the 2014 elections. In fact, there seems to be a strong correlation between the JD (U)’s 2014 vote share and the loss in NDA’s vote share between 2009 and 2014 at the Parliamentary Constituency (PC) level in Bihar. Also, the combined vote share of the BJP and the JD (U) increased from 38% in 2009 to 45% in 2014. This suggests that a part of the anti-NDA voters also rallied behind the JD (U) in 2014. 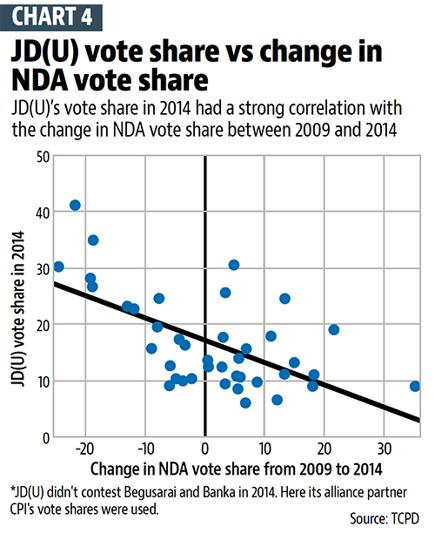 If JD(U)’s core voters made up an overwhelming majority of its 16% vote share in 2014, and they shift their loyalties back to the NDA, then the BJP and its allies can expect to sweep the state. If this is not the case, the BJP might have made a big mistake in making the JD (U) an important partner in its alliance in Bihar.

This quantitative argument fits with the qualitative evidence from Bihar’s recent political history. Even when he was a part of the NDA, Nitish Kumar always insisted on preserving an independent image of the JD (U) and personally maintaining an arm’s length distance from the Hindutva core of the BJP. It is this aversion which led to Kumar’s falling out with the NDA after Narendra Modi was declared the BJP’s prime ministerial candidate for 2014. This posturing allowed the JD (U) to retain sections of its voters who would otherwise be unwilling to do business with the BJP. If Narendra Modi becomes the main face of NDA’s Bihar campaign in 2019, and this is extremely likely, it might not be easy for Nitish Kumar to assert the JD (U)’s independence vis-à-vis the BJP like he did earlier. It is for this reason that stakes are the highest for the JD (U) as far as the 2019 elections in Bihar are concerned.